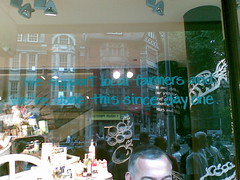 Whole Foods Market -- where I worked for several years in the nineties -- has opened on Kensington High Street. The opening has been well covered in the media, and my friend Valentine dedicated a recent blog post to it.

After reading the news and Valentine's blog post, I started doing some googling, mostly following up what I had read over Christmas in The Omnivore's Dilemma

by Michael Pollan, which is sharply critical of Whole Foods' supposed dedication to small local farmers.

What I found was interesting, to say the least. It seems the Pollan and John Mackey have been engaged in a year long dialogue about Pollan's criticisms. It begins with a letter from Mackey to Pollan to which Pollan responded. They wrote back and forth, and finally Pollan invited Mackey to come to Berkeley and debate the issues. Eventually, he did. The resulting discussion is available as a webcast. The whole exchange is fascinating, and the webcast is quite entertaining at points. If you've read the Omnivore's Dilemma, I recommend reading through their letters and watching the webcast.

Mackey's response probably falls somewhere between corporate damage limitation and a heartfelt reaction to Pollan's criticism of his company. Apparently, Whole Foods lost $2 billion in stock market capitalization after the release of The Omnivore's Dilemma, though certainly not all of this is attributable to the book's impact.

What I find encouraging about the whole exchange is that a well written, well researched and passionate book can bring about concrete change. While Pollan's book may not have been able to change U.S. agricultural policy (yet), he has certainly had an impact on Mackey. Whole Foods has introduced a number of programs to encourage local farming, fair trade and compassionate food production. Some of this may well have happened anyway, but Pollan's book certainly has a lot to do with it.

Whatever the reasons for the new Whole Foods programs, I am impressed by Mackey's response. It was personal and honest. Whole Foods didn't issue press releases (that I know of), but engaged in debate. That said, Mackey's last blog post smacks of a PR exercise. Whereas the letters and the webcast were thoughtful and straigtforward, this blog post -- which is an extended quote from Michael Strong -- is a saccharine and overwrought piece in honour of the great and glorious John Mackey.

I would still rather buy our produce from Riverford Farm or from a farmer's market. I think that the new Kensington store is unlikely to appeal to me. From what I've read and what I've seen of other Whole Foods stores, it is likely to be as overblown as John Mackey's last blog post. At least I won't feel as guilty when we're shopping at Fresh & Wild, assuming Whole Foods decides to keep these smaller stores open.