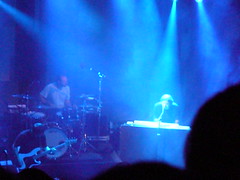 I've been a fan of Death Cab For Cutie for a while now. I discovered them while I was living in France. Hearing their earlier albums always brings back memories of hanging out in our very small living room, drinking wine with Steve.

I never had the chance to see them live, though. Possibly because their music is rather sedate. Complex and amazing, but often sedate. I just didn't think that they'd be very interesting live.

I was proven very, very wrong last week on Monday. Joanne managed to win us tickets to see Death Cab for Cutie at Koko, as a part of the iTunes Live: London Festival (did they come up with that name by committee?).

The whole show was great. Ben Gibbard has an amazing stage presence. He is energetic and clearly loves what he does. I shouldn't have expected anything less from a Seattle band, to be honest.

The highlight of the show was I Will Possess Your Heart. It seemed to last forever -- though not as long as the wall of sound at the end of the My Bloody Valentine gig, which I should blog about. I Will Follow You Into The Dark was equally amazing, though for different reasons. It was Ben Gibbard solo with a guitar. After treating us to a lush and intricate musical arrangement, he proved that he was equally capable of making incredible songs even when they are stripped down to the very basics.