I read my feeds on my daily commute to work. Over the past month, I've been experimenting with various RSS readers on the iPhone. I have yet to find the perfect feed reader. I have, however, tried three of the most popular iPhone RSS readers -- Byline, Newsstand and NetNewswire -- and thought I'd share my experiences with you.

This review will cover the pros and cons of these apps. It will focus the features that I personally want from an RSS reader. It's quite likely that there will be some features that I don't cover.

The features that I'll be looking at are:

As far as I know, there aren't any iPhone RSS apps that support offline Twitter, Delicious or Instapaper integration. It would be great if they did, though, as I use each of these applications for different things. 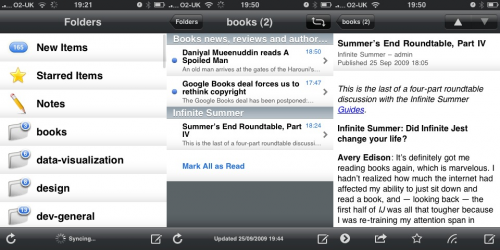 Of the three apps I'm reviewing here, it's the only one that supports sharing items and adding notes in Google Reader.

It is also the only app that correctly supports "reading through" a number of items then returning to a list. Byline returns to the correct place in the list: the item I've just finished reading.

I'm a big fan of the way Byline has implemented the email feature. It sends a link to the post, rather than the text of the entire post. I use email to send interesting items to my blog. If I want to highlight some text from the post, I can do that with cut-and-paste. Sending all of the text seem like overkill.

Byline has the best support for caching. It not only caches the items from my feeds, but it caches images, as well as entire web pages. All in all, this should be the ultimate app for reading feeds on the Tube.

Byline doesn't have support for Instapaper, Twitter or Delicious, though Twitter support is planned for the next release.

Reliability, however, is Byline's greatest problem. Cached web pages can often crash the application. I can accept this as this is a pretty astounding feature.

Byline has one reliability issue that means I simply can't use it. On closing the Byline, it will often forget all read items, shared items, starred items and notes. This is apparently a memory problem. The developer is aware of the problem and working on a fix. As amazing as Byline is in many respects, this one issue is a deal breaker for me. This is especially true since Byline 3.0 is still "a long way off." That said, if the performance and reliability issues are fixed in Byline 3.0, it may well become my feed reader of choice.

Newsstand has more integration features than any other app I've tested. It supports Instapaper, Delicious, Twitter, ReadItLater and Email. Strangely, with all these great integration features, it doesn't provide a way to share items and notes in Google Reader.

It caches unread feeds as well as images and provides a setting to choose how many images are cached per feed.

The "read through" functionality is the worst of the three apps I tested. When I return to a list of items after reading several items, it returns me to the top of the list. In a list with over 100 items, this gets old very quickly.

Newsstand has one annoying quirk that I haven't seen elsewhere . It doesn't display the author of an article. The author is an important piece of information. I want to know who wrote what I'm reading. 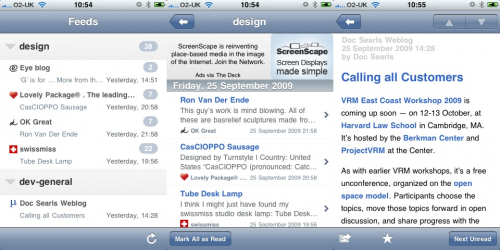 NetNewswire 2.0 for the iPhone was just released a few days ago. The old app felt clunky and didn't sync with Google Reader. The new app is much better, though I know there are those who disagree with me.

Where NetNewswire really stands out when it comes to performance. The entire experience is fluid -- even while syncing -- and syncing is lightning fast. After using Newsstand for several weeks, NetNewswire is a breath of fresh air.

Netnewswire does have a few quirks.

Caching is limited. It caches text, but not images. This probably explains why syncing is so fast. The lack of images can be annoying. Images aren't essential, however, as I tend to read image heavy feeds on my laptop before I leave for work.

That said, Newnewswire does cache favicons, but does it inconsistently. This is a shame, because favicons allow me to quickly scan and prioritize what is available in a folder.

"Read through" is implemented incorrectly: when I return to a list of items after reading through a number of items, I'm returned to the first item I read in the list. As with returning me to the top of the list, this often means unnecessary scrolling.

I don't like NewNewswire's interface for starring an item in Google Reader. When you touch the white star in the footer, a faint haze appears behind the star, but it then returns to the same state (a white star). I doesn't feel like I actually changed the state of the item. A little gray star appears near the title of the item, but if I've chosen to star an item while I'm in the middle of reading it, I often can't actually see the title of the item. This makes it impossible to know whether I'm starring or unstarring an item.

NetNewswire doesn't integrate with Delicious, and it doesn't support Google Reader sharing or notes. However, it allows me to send email, which is really all I need. Update: According to the NewNewswire FAQ tighter Google Reader integration will be a feature of future releases. Also, I was wrong, wrong, wrong when I said it doesn't integrate with Instapaper and Twitter.

NetNewswire is the only app of the three reviewed here that doesn't supply an icon badge indicating how many unread items I have. In fact, I don't see a way to get find out how my total unread items. Although it may not seem like it, knowing this is quite important. It has an impact on how I read my feeds. If the number is large I need to focus on getting through the feeds, and deciding what to read later. If it's small, I can take it easy and read at my leisure. Update: According to the NewNewswire FAQ icon badges may return in a future release as an optional feature.

All in all, despite the interface quirks, Newsgator has done a fantastic job on NetNewswire. They have managed to focus on what is important -- namely, performance and reliability -- and not get bogged down in integrating with every web 2.0 app under the sun.

The performance and reliability aren't perfect -- you are often greeted by a few seconds of blank screen -- but the whole experience feels a lot smoother than on Byline or Newsstand.

Why do no iPhone apps support "mark as unread?" Is this a limitation of the Google Reader API? This would be a remarkably useful feature.

Update: Apparently, Byline does support "mark as unread," so this is simply a feature that NetNewswire and Newsstand have chosen not to implement.

Update 2: The NewNewswire FAQ says that NetNewswire will be implementing this feature in a future release.

Each of these apps have their strengths and weaknesses. Byline has the best integration with Google Reader, but has serious reliability issues. Newsstand has fabulous integration with a number of online applications, but has performance issues that make it practically unusable. NetNewswire has a limited feature set, but is reliable and performs admirably.

For the time being, I'll be using NetNewswire. There are a few kinks to work out, but overall, it is the only feed reader on the iPhone that won't make my daily commute an exercise in frustration. In fact, I'm so impressed, I'm buying the Premium (ad-free) edition.