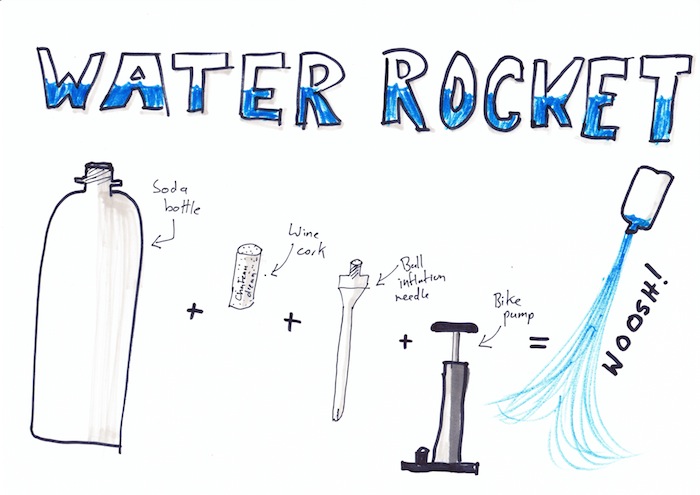 ). It's a book we've had for a couple of years, and this was the first project we did out of the book. We'll definitely be doing more.

The water rocket has been a big hit both with my son and a number of his friends (as well as some new friends we made when firing the water bottle into the air). I usually wind up pumping air into the rocket and they run around screaming gleefully and chase after it, as can be seen in the video below.

What we used permalink

What we did permalink 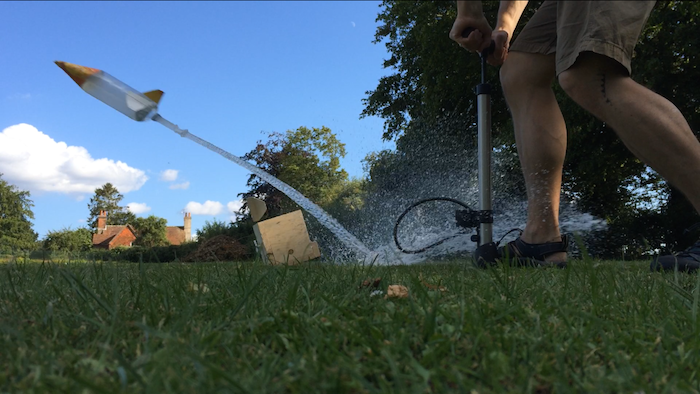 There are a couple of optional things you can do.

We cut stabilizer fins and a nosecone out of a cereal box and glued them on with a hot glue gun (an idea we got from Science Sparks. This definitely made the bottle look more rocket-like, but the didn't last for more than a couple of launches. You can see the first fin coming off in the above photo.

That was pretty simple. We used the instructions in Handy Dad for this. It involved a piece of wood, some screws, a saw and a screwdriver.

The first time we made a water rocket we were so excited, we didn't bother building a launch pad. We improvised one using the frame of my son's toy stroller (the kind you push a doll around in). It worked pretty well. It made for a more vertical launch than the launch pad we eventually made. The launch pad's angle means the the rocket flies further from the pad, but it doesn't fly as high as it does when using the improvised stroller launch device (or ISLD for short).

If you wanted to, you could go all out and follow NASA's instructions for building a water rocket launch pad. We haven't done this, but it looks like a fun project, as does the launch platform featured in Popular Mechanics.

What we learned permalink

Sometimes a wine cork is too small to fit snugly in a 2 liter soda bottle. We wrapped some electrical tape around the cork, and this did the trick.

The water rocket launches when the pressure in the bottle reaches 40 psi. This is remarkably consistent. It seems to remain the case no matter how much water we use or what type of cork (natural or synthetic or wrapped in electrical tape).

Why you should try it permalink

This was an incredibly easy project that was a lot of fun. We've now launched water rockets several times, and I expect we'll do it a several more times. It's encouraging that we're able to have this much fun for the cost of some soda and a bottle of wine.

We've also been able to use this to talk about air pressure and what makes rockets work, so it's educational as well as fun. NASA claims that the 2 liter soda bottle is greatest physical science teaching tool ever created, and I figure they know what they're talking about.