A few weeks ago my wife and son recently came back from a week's holiday. I missed them, as I always do. When they returned, my son taught me a valuable lesson. Twice.

Before they left, my son told me that he wanted me to make two paper airplanes and two lighty-up flowers like I made for Mother's Day. When they got back, I had a new paper airplane book ready for him. I suggested that we make the airplanes and flowers together.

We folded way more than two paper airplanes. The book was a good one. It had seven designs, but over 200 pieces of pre-printed paper with planes that looked like rockets, robots, circuits, bugs etc. As usually happens, after we folded and tested a dozen or so planes, my son decided he liked a particular folding pattern he liked (the 'Bug'). He then chose a piece of paper that liked. It was a 'Dart' not a 'Bug.'

The kid: Dad, can we fold this plane like a 'Bug.' Me: Well, it's a 'Dart,' so we should probably fold it like a Dart. The kid: I like the dart more. Me: If we fold it like that, these lines won't line up, and it might look a bit funny. The kid: Let's try.

So, we tried, and it looked pretty good. He loved it. We folded another non-Bug design into a Bug. He was satisfied with the three planes (one for him, one for me, and one for his Mum). He could also stack them to give his plane three different functions (one was a 'searcher,' one was a 'walker' and one was a 'zapper').

After that, we proceeded to make the lighty-up flowers. The deal was that I'd make one for him, and he'd make one for his Mum. I made his. When making it, I cut the petals a bit "too big." As I was making his little flower. He was also getting me to cut out bigger and bigger "ice cream hearts" (the petals are folded and cut so that they fold out from an ice cream cone shape to a heart to a cloud to the open petals). As I was doing this, he was piling them on top of one another.

Once I finished his flower, he said he had an idea. We could tape to pieces of paper together to make a big ice cream-heart-cloud-flower. We did, he opened it up, said, "It's huuuuge" and giggled gleefully.

The kid: Now let's make Mummy's flower. Me: OK. What color do you want it to be? The kid: Yellow. A sunflower. Let's make it like this one! Me: I don't know. If we make it that big, it might not say on the straw. (We were using straws for stems. The kid: Let's try.

One again, we tried. The flower was huge! And it worked. It hasn't fallen off the stem. 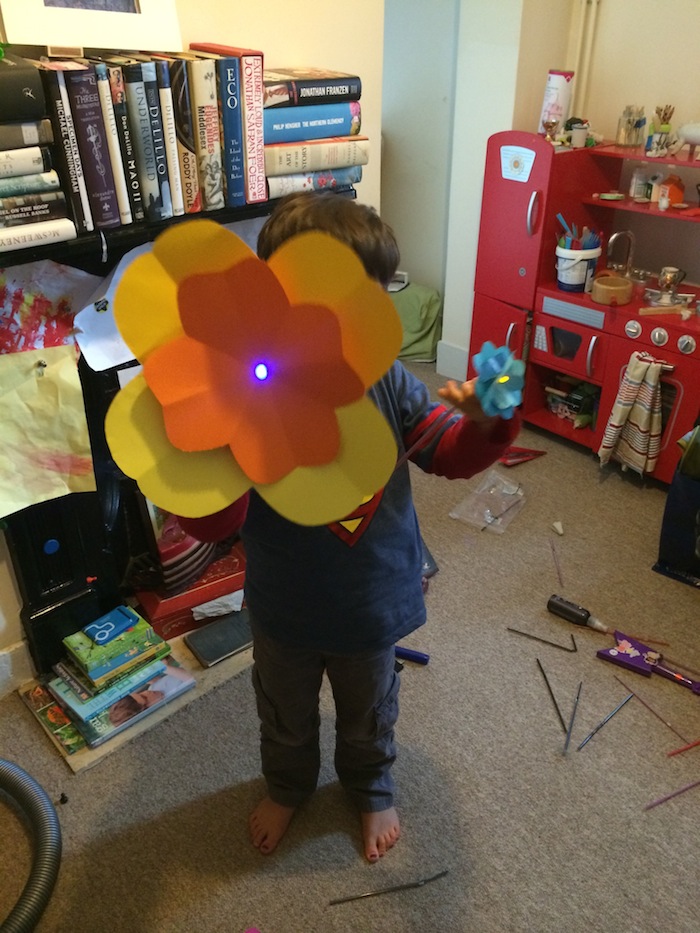 In both cases, he proposed something I thought we couldn't do, but he thought differently. I tried to discourage him, but not that hard. He asked me to try and I did. In both cases, it worked out well. It's interesting that this happened shortly after I watched Beau Lotto's TED talk in which he discusses how play celebrates uncertainty.

It's also a reminder that I need to be careful. Although we eventually tried what he suggested, I initially discouraged him. When we're tinkering and playing, I need to adopt a yes and attitude.