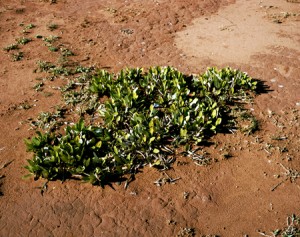 For the past several years, Rachel Sussman has been traveling the world taking photographs of organisms that are 2,000 years or older. Her photographs are superb, but I highly recommending visiting her blog where she has been chronicling her journeys around the globe and the extraordinary organisms she's met along the way. If you're impatient, you can get a quick overview of where she's been and what she's seen on this Google map.

I'm still exploring her blog, but my favorite so far is the underground forest. These plants are fascinating in and of themselves, but I love Rachel's story of how she learned of the plants while seeking out baobabs.

christine and i awoke early the next morning back in jo'burg, just in time to bid goodbye to diana and leave again. first stop: the pretoria botanical garden, where i had arranged to meet with dr. braam van wyk, a biologist there. i had first contacted braam to get information on the baobabs, and it turned out that he was wealth of information on other oldest living things as well, especially something referred to as underground forests, which are clonal colonies of pyrogenic geoxylic suffrutices. think of them as whole trees that have retreated underground, where only the very tips of the crowns make an appearance above ground. the underground forests could be hundreds of thousands of years old, as like other clones they could in theory be immortal. these have the additional advantage of not having had to survive through an ice age. i photographed what i could see at the botanical garden (which to, quote braam, is an ugly botanical garden.) more about these fascinating plants later.