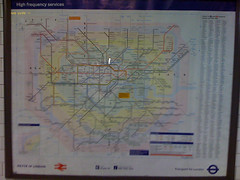 I've been a bit obsessed with the recent changes to the Tube map. It appears that the story may be coming to an end.

According to a story on BBC News, TfL will reintroduce the Thames to the Tube map in December. And it sounds like zones may be back as well.

A TfL spokesperson had this to say:

The overwhelming public reaction is that the Tube and Thames should be reunited, so that's exactly what we will do.

New maps showing the Thames will be reintroduced from December, the date of the next scheduled revision of the map.

We are also looking again at the provision of zonal information to ensure that it is widely available to customers and aim to reach a conclusion on that, also by December, when the new Circle Line service needs to be reflected.

In the meantime, I noticed two things.

Zones aren't even provided in the "Index of Stations" on the new paper tube map. This makes me wonder if TfL aren't considering a flat fee across the network (this is how it works on the New York subway subway system).

The second thing I noticed is an old Tube map with zones at Tooting Bec Station (pictured above). I don't think this was there on Thursday, but it was there yesterday.