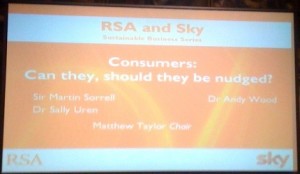 Tonight I attended a panel at the RSA on whether or not consumers should be nudged.

The first two panelists, Sir Martin Sorrell and Dr Andy Wood, decided to address Corporate Social Responsibility at WPP and Adnams respectively. While interesting and impressive, neither panelist directly addressed the questions of whether or not customers should be nudged.

Fortunately, Dr Sally Uren of Forum for the Future decided to address the question directly. She began by saying that a value-action gap existed. In other words, most consumers care about sustainability, but don't act on that concern.

She then suggested five steps could be taken to try to close that gap.

She concluded that consumers should be nudged, but that behavior change alone wouldn't be enough. Technological innovation also has a role to play, but is useless unless people start using improved technologies.

While I still have my doubts about nudging, both ethically and in terms of overall effectiveness, I thought her five steps felt somewhat familiar. Much of what she proposed sounds like basic advice for improving the user experience of a website.