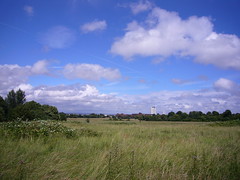 We've finally started the Capital Ring. The first stage took us from Woolwich to Falconwood. I've uploaded photos to flickr for anyone who wants to see more than just Woolwich Common.

Along the way, we got to see the Thames Flood Barrier up close, a run-down folly on top of Shooter's Hill and a lot of ancient woodlands.

Given the amount of rain we've had for the past week, we were quite lucky. We have a few quick showers, but much more sunshine than I expected.

The walk itself was excellent. There was some street walking, but for the most part we were walking through parks, commons and woodlands. It was actually surprising that there is that much green so close to the centre of London. There was very little of the junkyards and industrial areas that we walked through on the London Loop. If this is any indication of what the rest of the Capital Ring is going to be like, I'm really looking forward to it.

Update: I've mapped most of the photos in the flickr photoset, so you can view a map of stage 1 with photos. A few of the photos are best guesses.