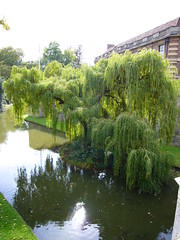 The day started off well. The weather was great, and everyone met on the train. Matt was kind enough to bring squeeze cheese, and there was much debate about the merits of this quintessential American foodstuff (or is it a petroleum product?).

The highlight of this walk is definitely Eltham Palace. We didn't actually go in. In fact, we only hung out on the moat bridge for a short time, but the grounds looked beautiful. Joanne and I will definitely be going back to get a peek inside some time soon. 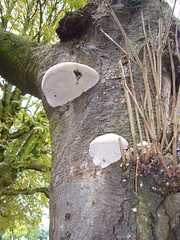 The other highlight of this walk (for me, at least) was a mushroom we saw growing on a nearly dead horse-chestnut. I tried to identify it using a £3 guidebook that I bought in the Lake District, but had no luck. Once I posted the photos on flickr, the mystery was solved. My friend saw the photo and pointed me to her friend's recent blog post on artist's fungus. Based on this, I was able to narrow it down and am pretty sure it is a Ganoderma applanatum. It was this photo from Queens, NY that convinced me that this is most likely the correct ID. Artist's mushroom is found all over the world and grows on dead or very old trees, such as our horse-chestnut. More importantly, you can draw on the underside of the mushroom. We didn't do that this time, but I'm definitely going to try it out next time I see one. It looks like fun.

We ended the day with a picnic in Chinbrook Meadows. It was a nice little picnic until I was threatened with squeeze cheese!