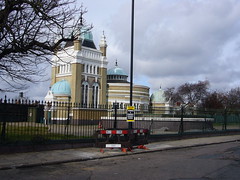 Last Sunday, we completed stage 5 of the Capital Ring, from Streatham to Wimbledon Park.

It was overcast the whole day, but we still got pretty lucky with the weather. It didn't rain until the end of the walk, just as there was a pub in sight.

The walk starts at Streatham Common Station. After a moment of uncertainty, we managed to cross under the railway. Jon and I found the first major difference between our guidebooks. (Jon's was published a few years before mine). After crossing the tracks, we were greeted by one of the highlights of the walk -- Streatham Pumping Station (pictured left). It is very grand building for what is effectively a waterworks. It was built in 1888, but I wasn't able to find any information on the architect. If anyone knows anything about the designer of this building, let me know in the comments below.

After this, it was on to Tooting Bec Common, where the rest of the walkers got ahead of me because I was too busy taking pictures of trees. We didn't visit the lake, which may or may not contain terrapins. Jon's guidebook claimed the terrapins were an urban legend, while mine seems in no doubt about there existence -- it warns that they will bite if handled!

After a brief detour through the wilds of Balham (look out for that pram!), we were walking across Wandsworth Common. Joanne and I had been here before. We took Barley, her parents' dog, for walk here a few months ago. It would seem that we chose the wrong side of the railway that runs through the common, because we completely missed the ponds. We got to see them this time, and once again, I took photos of trees -- willows this time.

We decided to take a detour through Wandsworth Cemetery. We spent time reading the headstones. One headstone with an angel pointing to the rapidly darkening heavens stood out.

As we left the cemetery, the skies became darker and darker. We put on our rain gear, quickly crossed the River Wandle and made our way through an industrial estate.

Just as it began to rain, there was a pub in sight. After another moment of indecision (was there another pub closer to the station?), we went in, narrowly avoiding a downpour. It didn't last long, however. Within 30 minutes, there was a rainbow outside the pub.